Aston Martin has recently confirmed that the design of the DB10 sports car (used exclusively for the latest James Bond film, Spectre) will inspire the next-generation Aston Martin Vantage.

Consequently, the new Aston Martin Vantage will share more similarities with the DB10 than the company’s latest new sports car, the DB11, will. With that being said, the company’s chief executive Andy Palmer said that styling cues from the DB10 will be visible throughout the British automaker’s next-generation range of vehicles.

“You’ll see the DNA for sure. It’s not the same—the DB10 was done exclusively for Bond. But you will see that ‘predator’ type look going forwards. The best way I can express it is that my mother will be able to tell the difference.”

Details about the next-generation Vantage remain undisclosed, but many believe there’s a good chance it will feature a turbocharged engine.

Many folks are saying Porsche stole the Frankfurt Motor Show this year with its very promising Mission E concept, a sporty and fully electric sports sedan.

While it previews a rival to the Model S, it looks closer in size to a Model III, the upcoming smaller Tesla sedan – but given that the latter is said to start from around $35k the Model S will be its target when it materializes into a production car down the road.

However, it’s not the fact that it’s electric, all-wheel drive and retro-futuristic on the inside. It’s actually all about the styling.  The front mirrors the well-styled 918, while the back is all 911 in a way never thought possible on a four-door sedan.

Porsche’s Concept Study Mission E also has its share of futuristic features. For example, the dashboard is divided into two levels with the upper layer containing the driver’s display. In-between the two levels is a holographic display that extends far into the passenger’s side. It shows individually selectable apps, which are stacked in virtual space and arranged by priority with a three-dimensional effect. The driver – or passenger – can use these apps to touch-free control primary functions such as media, navigation, climate control, contacts and vehicle. The desired symbol is activated by gestures that are detected by sensors. A grasping gesture means select, while pulling means control. Moreover, driver or passenger can use a touch display on the center console to control secondary functions such as detailed information menus.

Read more about Porsche Concept Study Mission E and watch the video below:

The new 488 Spider was unveiled at the recent Frankfurt motor show and there was plenty of fanfare.

The open-top, V8 supercar arrives only six months after the GTB was first introduced, and it becomes the most powerful drop-top ever to come out of Maranello.  As with the 458 Spider that went before it, the 488 uses a two-piece retractable hard-top. It’s 25kg lighter than the fabric roof used on the old F430 Spider. Like every drop-top Ferrari, the 488’s roof can only be operated when the car is stationary for safety reasons, but it can then be neatly and electrically stowed under the new flying buttresses in 14 seconds.

The added strengthening required to make up for the loss of a fixed roof means the Spider is 50kg heavier than the 488 GTB, but it’s still 10kg lighter than a 458 Spider. However, the aluminum chassis and body construction means the new car’s retained the same torsional rigidity as the coupé.

The manufacturer has also fitted an electric glass rear wind stop, which can be adjusted to three positions. Even when the roof is in place, the glass section can be lowered so that the driver can be exposed to the full V8 soundtrack.

As well as being Ferrari’s fastest-ever Spider, the 488 is claimed to be the most aerodynamically efficient drop-top from the brand. This is due to aerodynamic features such as the active front bumper and blown rear spoiler carried over from the GTB.

Ugo Colombo – and his entire team at THE COLLECTION – were proud to support Children’s Miracle Network through their “Miracle Jeans Day” campaign. 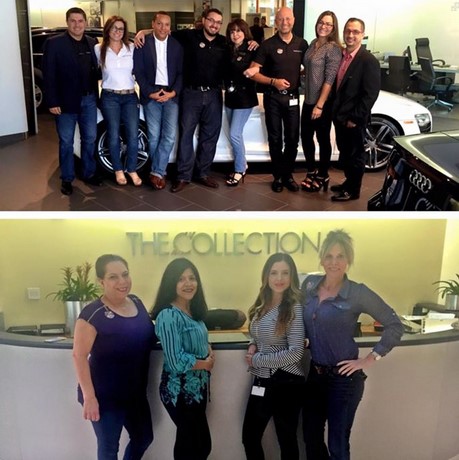 Miracle Jeans Day has encouraged groups and individuals alike to trade their traditional work attire for jeans and help raise funds for kids treated at the Children’s Miracle Network Hospital in their area since 2009. Miracle Jeans Day has raised more than $4 million to help fund life-saving medical needs in Children’s Miracle Network Hospitals since its’ conception.

One in 10 kids in North America is treated at a Children’s Miracle Network Hospital each year. Every single day, nearly 16,000 children visit the emergency rooms of their 170 member hospitals. Wearing jeans may lead to a more comfortable day in the office for you, but on Miracle Jeans Day it also generates hope for families relying on the services of a CMN Hospital.