After 13 of years of production the Aston Martin DB9 has come to an end. Originally tasked with replacing the Aston Martin DB7, the DB9 launched at the 2003 Frankfurt Motor Show, where the design created by Ian Callum and Henrik Fisker stunned everyone!

To celebrate the car that kept the company afloat when Ford sold the British marque in 2006, the ‘Q by Aston Martin’ division has added some ‘last of 9’ detailing on the final nine DB9s that came off the line.

In its first iteration, the DB9 was capable of sprinting from 0-100km/h in 4.8 seconds on its way to a top speed of 299km/h.  The platform of the DB9’s VH soon formed the basis of the DBS, Virage, Rapide, V8 Vantage and V12 Vantage, and the Vanquish over the next 10 years.

Since its first iteration in 2003, the DB9 was provided with a number of significant updates.  One of the most significant ones occurred in 2013 when it included a revised version of the 5.9-litre V12 thus bumping outputs to a heftier 380kW of power and 620Nm of torque. Coupled with an updated ‘Touchtronic 2’ 6-speed automatic tranny, the 2013 DB9 could spring from 0-100km/h in only 4.6 seconds.

Aston Martin created 150 special edition DB9s in 2015 to celebrate their relationship with the James Bond franchise.  They boosted the V12 by 22 kW (30 hp), there’s gun barrel embroidery, a numbered sill plate, and a special startup on the touchscreen infotainment system so the driver could feel more like 007.

The Porsche 911 Targa 4S is a stiff car with a well set up chassis. When you take a moderate entry speed into a corner the 911 Targa turns in with fluid precision.  It delivers towering grip levels yet it still offers a bit of progressive playfulness and mobility to the handling.  The steering is not as responsive as some might hope, but the 911 Targa is well weighted and it gives you a good feeling for how much grip you’ve got left.

There’s a real sense of gusto from low revs and that gusto carries on through a broader rev range.  The PDK gearbox remains one of the best out there.  It delivers rapid-fire shifts only when you want or need them.  This keeps things relaxed and smooth when driving in normal use.

The front is redesigned with four-spot day running lights, and the 911 Targa has a tweaked front spoiler and a sharper bonnet design. The rear has a new, heartier, look with amazing 3-dimensional tail-lights.  It also has a rear air intake which now has vertical, not horizontal, air vents.

When the roof is up the Targa 4S has the outline of a 911 coupe.  When you put the roof down it looks incredible, confident, stylish and distinctive.  The Targa truly stands alone in open-top motoring. 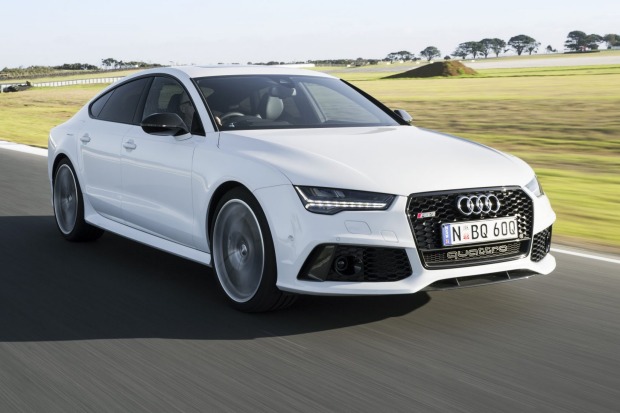 The Audi RS7 Performance is a beast!  Audi has bumped it to a 445kW, combined with 700Nm of torque (not to mentioned 750Nm on overboost), perhaps making it the world’s fastest wagon.

Audi’s trademark quattro all-wheel drive system means you’ll never have problems getting power on the road.  The RS7 goes from 0-100km/h in only 3.7 seconds.  Considering this is a wagon that can seat four people and all of their personal items, that’s great!

RS adaptive air suspension is standard in the RS7, which means you can alter the stiffness of the dampers and, therefore, you’re able to change the character of the car depending on the conditions you’re driving in. When you’re in “Comfort mode” it offers reasonable compliance, given its 21-inch alloys.  When you’re in “Dynamic mode” the RS7 feels taut and responsive, especially for such a large car.

Audi’s modern styling includes a blend of luxury and sportiness.  The materials used throughout the automobile are excellent and the interior of the RS7 is top notch.  The RS7 Performance includes a gloss-black grille, blacked-out tailpipes, contour-hugging RS sports seats, a restyled rear diffuser, and adaptive air suspension. There’s also proud “Quattro” lettering in the lower half of the grille.