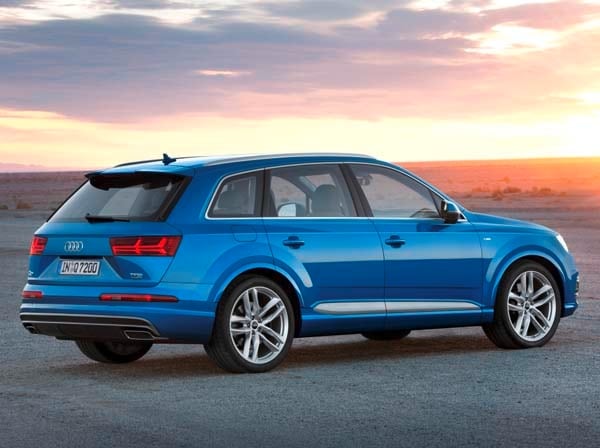 Audi pulled the wraps off of its new 7-passenger box full of luxury, style and technology in Switzerland. This 2nd-generation Q7 will be a 2017 model when it arrives in the U.S. next January.

All of the standard Q7 features return for 2017: Three rows of seating.  Quattro all-wheel drive Comfort and convenience features like leather seating and a power rear liftgate.  And a panoramic sunroof comes standard.

While many of its crossover peers have been playing catch-up, the 2017 Audi Q7 appears to take on a look that’s even more sport-wagon-influenced than before. It’s a familiar look and profile, but with a somewhat more chiseled look to the details, a more prominent beltline, and a roofline that looks ‘canted back.’ Up front, it gets a brighter take on the single-frame grille, with thick crossbars and a little more sculpting; it connects directly into the headlights. which now have either xenon HID, LED, or matrix LED lighting technology, and the DRLs are arrow-shaped.

Significantly, the new Q7 weighs a lot less than the outgoing model — between 500 and 700 pounds, depending on the model. The bulk of this diet comes thanks to lighter materials used in the outer construction, suspension and powertrain, and weight-saving attention paid to every other inch of the SUV — right down to two pounds saved by using aluminum for the brake pedal.

The exterior is not a wild departure from the current model, but the differences — particularly the LED headlight adornments and less-wide-mouth-bass grille treatment — make the big SUV’s case for bold. And while those outside dimensions are slightly slighter than the current Q7, the interior is notably roomier. The first two rows, in particular, stand out. The third row, generous in headroom and usable in legroom, is a cinch to access via the split second row’s fold-down/tumble-forward mechanism. The second row also slides fore and aft. The 50/50-split 3rd-row seatbacks can be lowered/raised electrically to expand the rear cargo space.